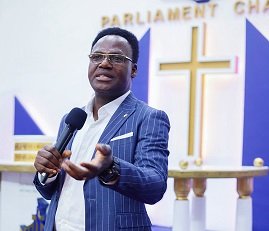 Founder and General Overseer of Parliament Chapel International (PCI) in Ghana, Apostle Francis Amoako Attah has revealed that the Month of August will witness significant change and it behooves all to remain steadfast and allow their mantle to be released.

According to him, we are in the season of Mantle and as must as people released their mantle, the only thing they need is the platform to be established.

He was speaking on Anopa b)fo) program today on Angel, where he revealed that many people had their seasons ended on July 31, 2022, and others are having their season released from August 1st.

He averred that there is a season God elevates His people and that there is a mantle of assignment that God has released until 14th August and people must use the period to discover their mantle or they will miss out.

“There is a global shift, a governmental shift, territorial shift, it is coming…We have entered into a season where all the elements have been released. There is going to be an eclipse by October, either 15 or 25th, there is war, battle, and a confrontation going on,” he said.

Apostle Francis Amoako Attah also mentioned that accidents, premature deaths, kidnappings, and attacks will be on the increase within this season.

“It will be Suicidal, bloody, this is the month of eruption and we must take things cool. God will pick some people to rise above,” he said.

Taking a scripture from the Bible, 1 Samuel 16: 1 “The LORD said to Samuel, “How long will you mourn for Saul since I have rejected 2 But Samuel said, “How can I go? If Saul hears about it, he will kill me.” The LORD said, “Take a heifer with you and say, ‘I have come to sacrifice to the LORD.’ 3 Invite Jesse to the sacrifice, and I will show you what to do. You are to anoint for me the one I indicate.”

4 Samuel did what the LORD said. When he arrived at Bethlehem, the elders of the town trembled when they met him. They asked, “Do you come in peace?” The apostle said God is giving people a mantle of leadership to rise from nowhere to become somebody and that when the time comes, God will do everything to ensure that His promises will never fail as he did with Samuel.

“God influenced the Prophet to lie in order to accomplish something. God will do everything possible when your time has come. All you needed is the people, the platform, and the product God will give you.
He encouraged people that as they enter the season from the 2nd day of the 8th Month, not to just jump into money and leave their time.