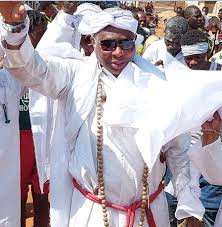 The Paramount stool father of the Prampram Paramountcy, Numo Osabu Abbey IV, has called on natives of Prampram to mark this year’s Homowo Festival without any fear or intimidation.

With barely some few days to the annual festival, which will be held between the 23rd and 24th of August, there has been concern of a possible repetition of past events that had been characterized by violence.

However, Paramount Stool Father of the area, Numo Osabu Abbey who acts in the capacity as head of the Prampram Traditional Area, has dismissed such concerns, stressing that all the necessary security arrangements have been made to safeguard the interest of the people during and after the festival celebrations.

Numo Osabu who was speaking during a meeting with heads of the 3 royal gates of the area, assured the good people of Prampram that, this year’s festival will be a foundation on which arrangements will be made to get a good leader for the People of Prampram.

He said letters have since been sent to the Regional Security Council and all persons that matter in the interest of Prampram, imploring them to ensure the use of thugs and hooligans by some individuals to intimidate or assault persons who do not support their agenda, should be scuppered during this year’s Homowo festival.

Heads of the Abbey/Doku Mansro We, Tetteh Djan/Larbi Agbo We and the Kwei Opletu We, who were present at the meeting, also affirmed their allegiance to the stool father, promising to ensure this year’s festival is celebrated peacefully.

They called on the stool father to ensure that, members of the various gates observe the performance of their traditional rites, such as the sprinkling of kpokpoi which has been a bone of contention in the past years, in their respective homes, in view of the fact that Prampram is yet to enstool a chief.